The book has already been very popular with readers.  Thank you to everyone who has written such nice things about it.  If you read it and enjoyed it too, then please leave a review online.

Please avoid the pirate sites claiming to offer the book for a suspiciously low price.  They’re lying, or they’re illegal, and they may put malware on your computer. 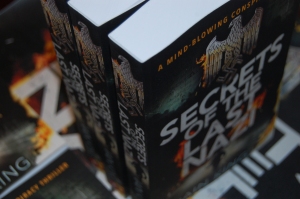 Secrets of the Last Nazi

Since Secrets of the Last Nazi became Britain’s best-selling spy story in the summer, it has continued to become even more popular.  After six months of growing sales, it reached the number 35 position on the main Amazon.com chart, and has now topped several sales categories in the US.  Thanks to everybody who bought it, and especially to those of you who have written such wonderful reviews about it.  Here are some nice comments from readers.

Thanks also to the bloggers who have described the book as “unputdownable”, “fantastic” and “mesmerising”.   And particularly thanks to two North American reviewers – one concluded the book is “an incredible revelationary work that may just change the way you look at the world”, and the other that it is “one of the most original and carefully thought out stories that have yet to appear in print”.  Both are correct.  Thank you all for your support.

If you liked Secrets of the Last Nazi too, then please write a review of the book and post it online – it usually takes only a minute to put a review on Amazon or Kobo, and each one can make a huge difference.  Five star reviews (if you think it deserves five stars) help keep the average rating high, which in turn brings new readers to the story.

Click here for a free preview of the book, if you haven’t bought it yet.

Making Peace in War tells the fascinating, harrowing, deeply personal and sometimes absurd personal testimonies of civilians who worked in Helmand’s frontline.  The British Army Review concluded “If you read just one book on Helmand, read this”.  Click here for more information on the book, including where you can buy it.

Peace at Any Price was described by the Economist magazine as “excellent”, while a respected journal concluded it was “One of the most perceptive accounts ever written on the practical difficulties associated with peace building in the aftermath of ethnic conflict“.  To learn more about the book, click here.

This article explains why modern war is different from what most people think and for my series on ‘thinkers at war’ in Military History Monthly magazine – the military experiences of philosophers,  click here.

How to Make Good Decisions and Be Right All the Time

Is it ethical to give a book a satirical title, when you know some people might not get the joke?  Find out by reading How to Make Good Decisions and Be Right All the Time.  You can read the first chapters here (free), and there’s a summary of the whole book in sixty-two bullet-points, here.

For people who prefer their bullets to come from action-thriller heroes, try this explanation based on Jack Bauer from the TV series 24 (I don’t know the author, but it’s a great piece, even when he lampoons my book).  Or you might prefer this piece from a very remote part of central Africa about how we get moral ideas and what it means.  And if it’s still all that’s too long for you, then here’s a summary which (in December 2015) was barely longer than the title itself.

Finally, here are some moral philosophy puzzles. You can decide whether it’s ethical to waste your time on them.

Thank you for reading.