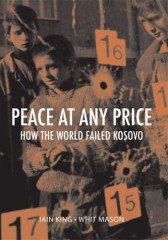 This book chronicles the international intervention in Kosovo – from civil unrest to NATO engagement, through international adminstration and independence.  One of the largest, most intensive missions ever, Kosovo holds some important lessons for interventions elsewhere.  This book provides a detailed account of what went well, what didn’t and why; and concludes with a series of lessons for the future.  More details about the book – including how you can buy it – are available through the US publisher, Cornell University Press, here (link to Peace at Any Price).

Praise for Peace at Any Price

“An excellent and timely book…. a serious and well-considered book” – The Economist

“One of the most perceptive accounts ever written on the practical difficulties associated with peace building in the aftermath of ethnic conflict.” – Journal of Southern Europe and the Balkans

“The authors have lived and worked the issues they write about for years. The benefits are evident: a book that is profoundly researched, sensible, intelligent and important.” – The Observer

“This remarkable book could not be more timely …. they deserve to be warmly congratulated for a cogently argued, brilliantly presented and, above all, highly informative and thought-provoking piece of work.” – International Affairs

“This book is a personal and compelling account of what has gone wrong in Kosovo and how the process of building stable societies can be done better in the future.” – Journal of Peace Research

“Cogent ,timely, and comprehensive, this well written and often compelling book should be read by all who want to make a success of what the international community has so far mostly failed atrebuilding states after conflict. Kosovo is, on a per capita basis, the world’s most heavyweight modern attempt at reconstructing a state after war. It has so far failed and we need to know why, what went wrong, and what we need to do better. This book, written by two people who took part, is the first comprehensive study of the Kosovo operation and provides a much needed, balanced, and convincing review of what has happened and what we must not allow to happen again.” – Lord Paddy Ashdown, GCMG, former High Representative for Bosnia and Herzegovina

“Peace at Any Price is an important, timely, and comprehensive addition to our understanding of the difficult, but vital, process of conflict transformation. Iain King and Whit Mason provide a frank account of the international community’s experience in Kosovo and a valuable guide to building stable societies in war-torn regions.” – United States Institute for Peace (USIP)

“An extremely important and very well written account of the work of the UN in Kosovo.” – Journal of Southern Europe and the Balkans

“The aim in winning the peace following the 1999 Kosovo war was stated early and often: “to transform Kosovo into a society in which all its members could live in security and dignity.” But that is not what has happened. Why not? Because it was a wrong war? No, say the authors. Because the mission was too much for the international community? No again. Because the wrong people were in charge? Once more, no. Rather, because too little was understood about the obstacles, too little was provided for the mission early on, too little was done to overcome the inevitable disunity among multiple agencies, too unrealistic was the timeframe. The authors end with ten lessons, among them: security before democracy, focus less on ending wars than establishing a just peace, the “overall vision is more important than detailed objectives,” and “a mission must be prepared to assert its authority from day one.” — Foreign Affairs